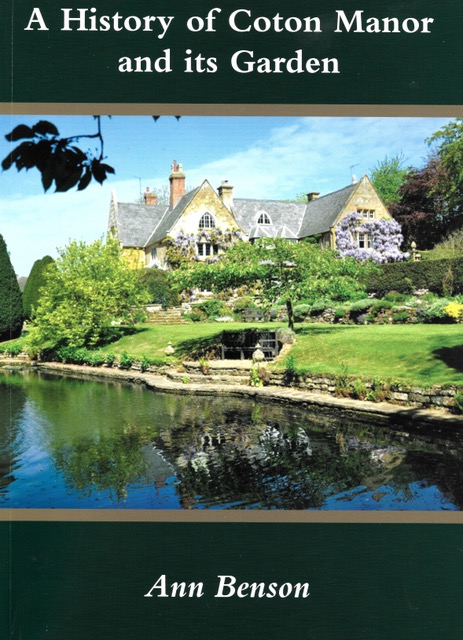 A History of Coton Manor and its Garden by Dr Ann Benson tells how the house and its surrounding designed landscape have developed – and survived – from Domesday to the present. It covers the ravages of Civil War when the ancient house was razed to the ground, and Restoration when the house was rebuilt in 1662 from stone salvaged from nearby Holdenby House. The fortunes of subsequent owners rose and fell to leave the house as a farm by the 1800s.

In 1926 the house was radically changed again when an American woman and her English husband moved from Florida to settle in Coton’s quiet corner of Northamptonshire. The couple sympathetically extended the building to create a quintessential English manor house with a garden whose ‘bones’ can still be seen today. That couple were the grandparents of the current owners. It’s rare to find a garden that has been in one family for nearly a century, and rarer still to be able to follow that garden’s history and growth over the years, as one generation handed over to another.

The author first visited Coton’s garden in the 1990s when she regularly brought her elderly mother to enjoy its therapeutic surroundings. Both a scientist and historian by training, her extensive research uncovers unknown documents and photographs that not only reveal the history of the manor of Coton but also illuminate the story of English country life across the twentieth century.

Coton Manor is now famous for welcoming thousands of visitors to its garden each year, many making an annual ‘pilgrimage’ to its bluebell wood in late April. However, it is still very much a home with the owners being hands-on in its maintenance and the opening of the garden to visitors. Anyone who loves the history of houses and gardens, and how these reflect the lives of the people who live and work in them, will enjoy reading this book.

To purchase a copy of the book online, please visit the author’s web site at www.annbenson.co.uk.

A History of Coton Manor and its Garden

This book has been described as ‘splendid and very engagingly written’  by Professor Tim Mowl and ‘charming and heartfelt’ by Dr. Charles Moseley.

The book may be purchased when visiting Coton Manor (no mail order) or from the author’s web site www.annbenson.co.uk (mail order with £3.00 post and packaging).

Payment is by cheque or credit / debit card using Paypal buttons on the Home Page of the web site. The Contact Page on the website has an email facility so messages about the delivery address and any dedication requests can be sent directly to the author.

Any cookies that may not be particularly necessary for the website to function and is used specifically to collect user personal data via analytics, ads, other embedded contents are termed as non-necessary cookies. It is mandatory to procure user consent prior to running these cookies on your website.